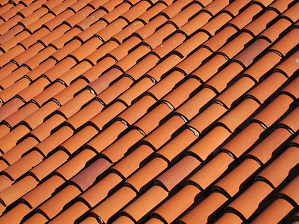 Europe is known for a lot of wonderful things: the food, culture, history, and sights, among other things. Europe is beautiful, chic, and classy as proven by the high demand for European fashion. But did you know that the continent is known not only for its beautiful clothes but for its contribution to tile designs as well? In fact, many roofing tiles are of European origin.

Before you hire a roofer Utah homeowners or friends may have recommended, you might want to brush up on your roofing basics. Roof tiles trace their roots back to Greece in the third millennium B.C.(although some sources have disputed that fact, saying that China was first to use clay roof tiles as early as 10,000 B.C.) Evidence of the Greek’s use of these tiles was unearthed by archaeologists who found fragments of terracotta tiles in Lerna, southwest of Athens.

Mediterranean roof tile was historically made of clay and was touted for its fire-resistant properties. Generally, the tile featured a taper that allowed it to sit and fit onto the next one as the roof was being installed. Any roofer Park City residents may choose to do work on their roofs will tell you that this feature, in modern versions of this tile, helps to enhance the tiles’ capability to withstand extreme conditions.

Heavy Greek and Roman influence is apparent in the design of Spanish roof tiles—not surprisingly, given that both once colonized the Iberian Peninsula. These tiles are typically characterized by quarter-round tubes with ridges that help direct rainwater off the roof and, at the same time, work to secure the tiles in place. Spain introduced these tiles to the rest of the world at the height of its maritime power.

English roof tiles evoke the charm of aristocratic country manors and old churches. Their design is largely influenced by the Normans, a race from Northern France that invaded England in the Middle Ages. Today, these roofing tiles come in a variety of shapes and colors that look beautiful in any type or style of home.

When choosing among Mediterranean, Spanish, English or any other kind of roof tile, it is recommended that you consult with a roof repair Utah professional. Contractors from roofing companies such as S&S Roofing can help you decide on the type of tile that will best suit your home.