S&S RoofingBLOGBlogProfessional Utah Roofers Prioritize Safety as Much as Getting the Job Done
May 31, 2012 May 31, 2012 By Rob Aubrey Blog 0 Comments 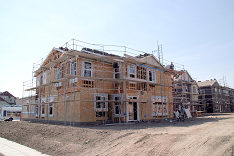 Sometimes, you can spot a roofer’s skills by looking at how safely he completes his work. Without the right safety gear, a roofer can get broken limbs and severe concussions if he’s lucky – as falling off a roof has worse consequences. Try observing Utah roofers carefully and take note of any safety breach, if any at all.

In November 2011, the Occupational Safety and Health Administration (OSHA) released a list of the top ten violations many laborers commit. Some of them may not be directly related to roofing but others surely are, such as the following two items.

Ample protection against sudden slips and falls should be a no-brainer for roofers. Being roofing specialists, they work several feet above ground, carrying multiple tools with them. Part 1926 of Safety and Health Regulations for Construction says workers must use fall arrest systems when working at heights of six feet and above. Safety harnesses and ropes are some examples of fall arrest systems.

Even though this is a no-brainer for many people, OSHA ranks it as the top violation of the year 2011. Wonder about a roofer who doesn’t use harnesses while at work. Reputable Salt Lake City roofers never leave fall protection out of the equation. After all, whatever professionals do, they do because they intend to make a living first, among other things.

Another simple-as-ABC item for expert roofers is the ladder. Roofing tasks require ladders, especially if the damage is near the edge. Again, Part 1926 of the Safety and Health Regulations for Construction demands all ladders must support a specific weight. For example, your portable ladder at home must support at least 3.3 times the maximum intended load.

While ladders fell to number eight on OSHA’s 2011 list, compared to being number five on the 2010 list, it’s still a primary concern. Roofers should bring a handy ladder to facilitate roof repair jobs more efficiently and, above all else, safely.

Overall, a professional roofer knows his safety more than anybody else, which is why he has to use all means to do his job safely. The said list of regulations also mentions the responsibility of the employing contractor or subcontractor to determine if the roof is safe to work on. Surely, no employer among Salt Lake City roofing companies would want to have to deal with damages other than those they’ll be fixing on the roof.